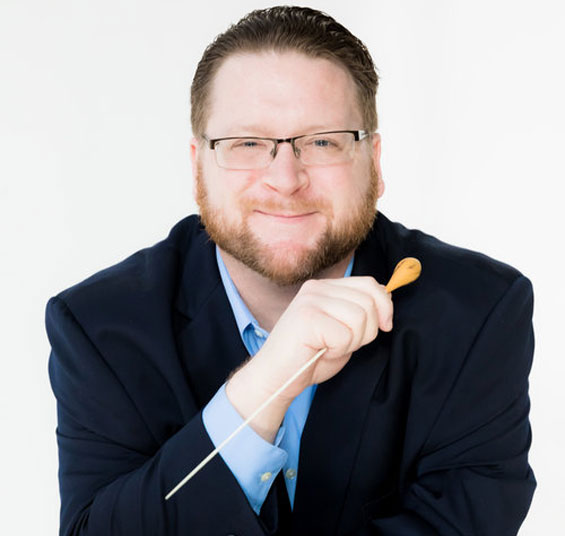 Dr. Parker is the recipient of numerous honors, awards, and scholarships. He was named a finalist for a Conducting Fellowship with the New World Symphony, a semi-finalist for a Conducting Fellowship at Tanglewood, and a Candidate for the Respighi Prize in Conducting; he also received a Citation of Excellence in Teaching from the Pennsylvania Music Educators Association. An active scholar, Dr. Parker’s writings have been published by the Conductors Guild and the College Orchestra Directors Association (CODA). He has presented research at the College Orchestra Directors Association’s national and international conferences and is Editor of the Journal of the Conductors Guild.

Parker earned a Doctor of Musical Arts in Orchestral Conducting from Michigan State University, where his primary instructors were Leon Gregorian and Raphael Jiménez. During his time at MSU he regularly appeared with all the university orchestras and focused his doctoral research on Leonard Bernstein, specifically the composer’s Symphony No. 2, “The Age of Anxiety.” He earned a Master of Music in Orchestral Conducting from Bowling Green State University, where he studied with Emily Freeman Brown. His other conducting mentors include Stephen Osmond, Gary W. Hill, and Timothy Russell. In addition to his training in academia, Dr. Parker participated in numerous conducting master classes and workshops, conducting orchestras under the tutelage of nationally and internationally renowned conductors and conducting pedagogues including Christoph Eschenbach, George Hurst, Arthur Fagen, Markand Thakar, Mark Gibson, David Itkin, and Paul Vermel. Parker began his collegiate education at Arizona State University, where he studied bassoon with Jeffrey G. Lyman and graduated magna cum laude with a Bachelor of Music in Bassoon Performance.

Nat resides in Kennesaw with his wife, Melody, their son, Jacob, and their dog, Sammy.