The mission of the Georgia Symphony Orchestra is to enrich our community through accessible, high quality musical and educational experiences that instill a lifelong appreciation for the arts.

Our vision is to continue growing a thriving and innovative cultural organization that enriches, educates, and inspires audiences, students, and musicians in the community. 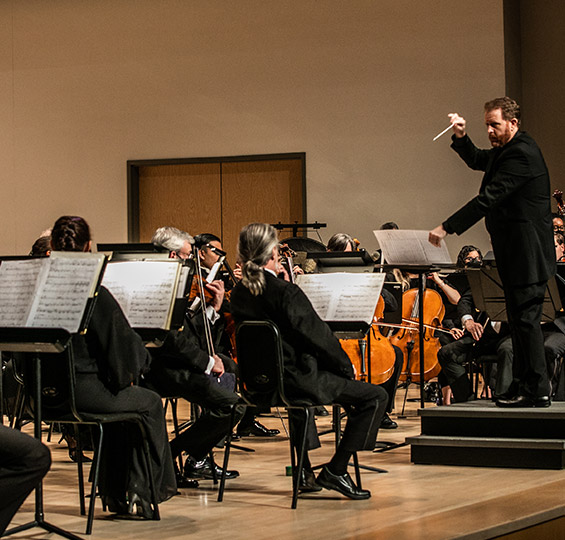 In 1951, The Marietta Music Club emerged from humble beginnings. The music room of Arthur F. Moor’s home on 383 Church Street in Marietta would establish the foundations for what would evolve over the next sixty-plus years. Talented local musicians would come together to create and share wonderful music with audiences. From 1955 until 1989, Betty Shipman Bennett conducted the orchestra through this long period of development. The music club grew to become the Marietta Community Symphony. The quality of the performances steadily increased, as did the dedication and hard work of the orchestral musicians.

A Change of Pace

Her successor, Steven Byess, continued attracting a wider range of local talented musicians to the orchestra, then known as the Cobb Symphony. The orchestra expanded the number of professional musicians and continued raising the artistic standards of the ensemble. In July 2004, Michael Alexander’s tenure as Music Director began with the Cobb Symphony. Through his leadership and directives, the organization grew to include the Georgia Youth Symphony Orchestra, which has grown to be the largest youth orchestra program in the south-east. As the organization’s mission and role in the community expanded,  it was again in search of a name more fitting of its growing footprint. And in 2011, the organization became the Georgia Symphony Orchestra. In 2007, the Georgia Symphony Chorus was formed. And from its inception, Bryan Black has held the position as its venerated Chorus director. Comprised of accomplished vocalists from the greater metropolitan area, the GSO Chorus performs choral/orchestral works, pops, and independent choral concerts. Alexander’s final concert with the organization was in May 2015, leaving the GSO poised to select a new Music Director.

After a 2-year search process reviewing over 130 candidates from across the world, the GSO selected Timothy Verville as its new Music Director. Beginning in the fall of 2016, Verville instituted several initiatives aimed at re-energizing audiences,  expanding educational outreach, presenting collaborative performances, and finding ways to reach deeper into lesser represented communities. In the 2021-2022 season, the organization received it’s largest ever gift, a one million dollar endowment from the Bobbie Bailey Foundation, Inc.

Arthur F. Moor’s daughter (and member of the original Marietta Music Club,) Elizabeth Moor Tomlinson, so loved the orchestra that upon her death she bequeathed it $50,000. Her brother, Ralph C. Moor, continued to support the GSO in his sister’s name until recently passing at 102 years old. The organization is built on the foundation of music appreciation and community involvement. With those guiding principals at its core, it has witnessed a steady evolution over 70+ years. And while the name has changed to better reflect its growth, audiences across the region and throughout our history have been consistently enriched by the musical gifts of the orchestra and greater organization.

0
Musicians (From Professionals To Students) Performing In Our Organization
0
Years Of Making Music
0
More than 33+ Performances Presented To the Community This Season
0
Over 17,000 People Are Served By Our Programs Annually